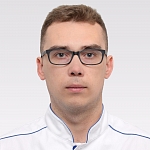 2006 - graduated from Berduchiv Medical College. Received a Diploma of a Medical Assistant.

2012 - graduated from the National Medical University named after Bogomolets, Kyiv.


During the training and practical activities I acquired skills in providing emergency care for patients with various types of surgical and therapeutic pathology. I am able to conduct cardio-pulmonary and cerebral resuscitation, according to the recommendations of the European Resuscitation Council (ERC Guidelines for Resustitacion). I have mastered the skills of helping patients, applying BLS, ALS, ATLS techniques. I am able to choose the correct tactics of patient management, which is in a critical condition. Mastered the skills of general and regional anesthesia during major surgical interventions.

2014 - participant of the "Introduction to the basic techniques of regional anesthesia" cadaver-workshop.

I regularly attend meetings of the Kyiv Association of Anesthesiologists.

Main responsibilities: pre-surgical examination of patients, detection of concomitant pathology, determination of the degree of operational risk, correction of medication before surgical intervention. I conduct anesthetic support of ophthalmologic surgical interventions (retrobulbar anesthesia, intravenous anesthesia). I supervise the patients and choose the best methods of anesthesia in the post-operative period.