Main
News
People will be able to walk again thanks to the Ukrainian exoskeleton. It is controlled by thought

People will be able to walk again thanks to the Ukrainian exoskeleton. It is controlled by thought

Olexandr Kulyk – a Ukrainian neurosurgeon, Director of the “Nodus” clinic. He created an exoskeleton that will lift to feet those, who have been confined to a wheelchair. His invention turned out to be more functional and lighter than other exoskeletons existing in the world. Europeans have already paid attention to this innovative engineering project.

In an interview to MC Today Olexander Kulyk told about his invention and about innovations in the Ukrainian medicine.

HOW did the idea of creating an exoskeleton born? 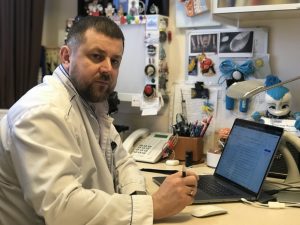 Over the years of working as a neurosurgeon I realized that a surgical intervention does not always help patients to recover completely.

Before I had speciliased in neurooncology. Quite often I saw patients come on their feet to have a surgery and after the surgical intervention is made, leave a clinic in a wheelchair.

If a tumor is in functionally important areas of the brain, its removal can lead to the partial loss of the ability to move. Unfortunately, oncology makes a choice between life and health.

Before each surgery intervention, we warn patients about possible consequences. Despite this, people are often upset not so much about problems with mobility, but by the fact that they go practically nowhere for rehabilitation. The status of a cancer patient often scares rehabilitation therapists and related specialists.

It was depressing, and I wanted to help the patient not only prolong life, but also improve its quality. At some point, I realized that we, neurosurgeons ourselves , have to figure out how to compensate for the function of the human body that cannot be restored.

I had been thinking about innovative methods of rehabilitation for a long time, but only work with neuro-oncological patients prompted me to take real action.

I mastered several more professions, studied in detail all the developments of the Ukrainian Institute of Neurosurgery, studied abroad, from Japan to Germany.

In theory, it was clear that the human brain can be restored with proper rehabilitation, but in practice, unfortunately, everything often looks different. Then I started looking for a solution among external devices. So the idea of creating an exoskeleton came to my mind.

WHAT is an exoskeleton? 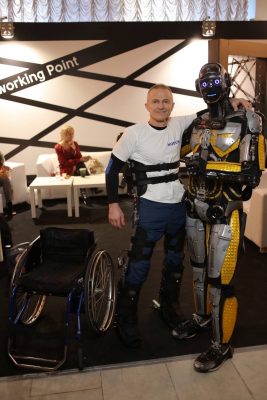 Most people with immobilized legs use wheelchairs. But this is the past – an outdated approach.

In the third millennium, in the era of a technological breakthrough, we must think about how to make these people feel barrier-free.

A wheelchair is a” dead end” of recovery, not to mention the fact that a long stay in a wheelchair causes various complications.

We started developing the exoskeleton ten years ago. There are five doctors and two technicians in our team.

Over this time the exoskeleton has been made in several versions. We created mechanical, semi-mechanical, hydraulic models. The latest development is a bionic exoskeleton, that is one that is controlled by brain impulses and works on the basis of gas hydromechanics (combines hydraulic and mechanical drives - ed.) and controlled electronics.

Such an exoskeleton is suitable for the patients in a grave condition, due to organic impairment to the spinal cord and brain, for those, who cannot walk at all.

The bionic exoskeleton, contrary to the usual one, not only supports the idle motor segment of the muscles, but also provides the skeleton. Thanks to him, muscles and organs are physiologically located, as on a real skeleton.

This is a platform that takes on the tasks of non-working muscles, turns their movements into moving the whole body in a given direction with a given and changing speed.

The exoskeleton enables to completely resume the physiology of movement, allows to move the hip, knee, ankle joints and so on. Moreover, the parts of our exoskeleton are so ergonomic that it simply lies on the foot. Under loose clothing, you may not even notice that a person’s leg does not work.

A person cannot put an exoskeleton on like a gadget and go. In order to learn how to move using this exoskeleton, it is necessary to undergo a specialized rehabilitation and recovery program in our clinic.

What is different in your exoskeleton in comparison with existing exoskeletons? 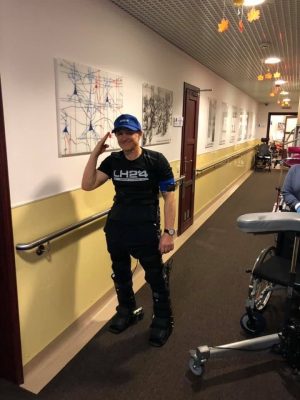 We have developed a system that “reads “nerve impulses. Man himself controls his walk. He does not feel his legs, but he knows that if his muscles are strained, he will send nerve impulses that will trigger the exoskeleton mechanism.

In addition to the skeleton itself, sensors are fixed on the person. Using a specially designed program, they read muscle contractions and monitor the cardiovascular system. There are also sensors on the functional nodes of the exoskeleton: they constantly analyze their performance and the current position.

The first physical exoskeleton prototype appeared a year ago, now we are testing it and are going to officially present the project at the beginning of the next year. Next year we are going to develop such an exoskeleton for children.

We literally create all the products with our own hands: we draw the drawings ourselves, think over the models, select the material, and assemble. I have converted my garage into manufacturing facility, there are hobby devices, 3D-printers, welding machines.

Although I am a neurosurgeon, I even had to master a lathe. I also studied 3D modeling, became a certified specialist.

There was a period in my life, when I had no vacation for 12 years, although I worked at three jobs in three different clinics. And when everyone was going home after doing surgical interventions, I was going to my garage. All this had to be done in order to finally have a bio-controlled exoskeleton

We had been testing all our exoskeletons on volunteer patients, and improved models on the go. At first, the calculations showed one thing, but in the process it turned out that the friction was wrong and the nodes were heating up. Everything was redone on the go.

There were difficult moments when we were close to giving up everything: there was not enough money, we could not find a specific steel for the parts, carbon fiber was breaking, we could not find the right weave. But we have already overcome all these problems.

We use only certified materials. We tested all the important details on special machines for a thousand cycles. In the process, half of the parts were torn and broken until we found the most stable structure.

We did all this at our cost. By now we have spent $ 250 thousand on the project.

The exoskeleton is to be comfortable to use. Using special alloys and plastic, we significantly decreased its weight. Outperformed many of our world competitors, making our exoskeleton by 20-30 kg, and the top manufacturer exoskeleton by 13 kg.lighter than other models available in the world.

Given the fact that related technologies are developing, in two years the exoskeleton will be even more lighter.

About search of investment 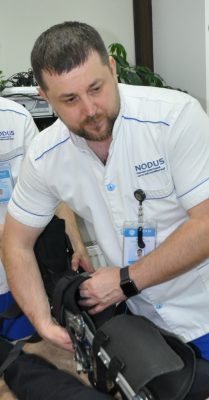 We are not looking for investments to complete our exoskeleton engineering project, it is already completely ready. Now we need investments in order to launch a large-scale production. To do this, we need $ 2 million.

One exoskeleton costs on average $ 20-25 thousand. This is three- four times cheaper than the analogues in the world. And much more cheaper than specialized intensive rehabilitation, which lasts two years, costs an average of 4 million UAH and does not guarantee anything.

Now we have potentially 100 pre-orders. That is, investment in the project, including the money that we have invested on our own, we will pay back by selling the first 90 exoskeletons.

About innovations in Ukrainian medicine

In sales, we focus primarily on patients. In Ukraine, it makes no sense to rely on state financing, although we, of course, will use every chance.

This is a very specific market for such product as an exoskeleton. People who will walk the streets in an exoskeleton and live a full life may be.the best advertisement for us. Only then our society will be able to reconsider their perception of wheelchairs, to realize how outdated they are.

Of course, in Ukraine we expect great resistance from side of the wheelchairs manufacturers, we get ready that they will tell us that we are using unproven treatment methods. But we also expect great demand for our Ukrainian exoskeleton from foreign markets: Italy, Germany, Canada, Poland, Austria.

Until now, not a single state institution has supported us. We know cases when companies received state money for such projects and then had problems with the prosecutor's office, the SBU, and the tax authorities for every 10 UAH spent from the state budget. We don’t wish this.

A year ago, we showed our engineering product at one closed specialized event. After that, we immediately received offers from one Italian factory that makes bionic prostheses, to place production with them. They wanted to buy the whole project, but we refused.

“We do want such technologies to develop in Ukraine, so that our doctors do not leave the country, and that investing in Ukrainian medicine becomes attractive.”