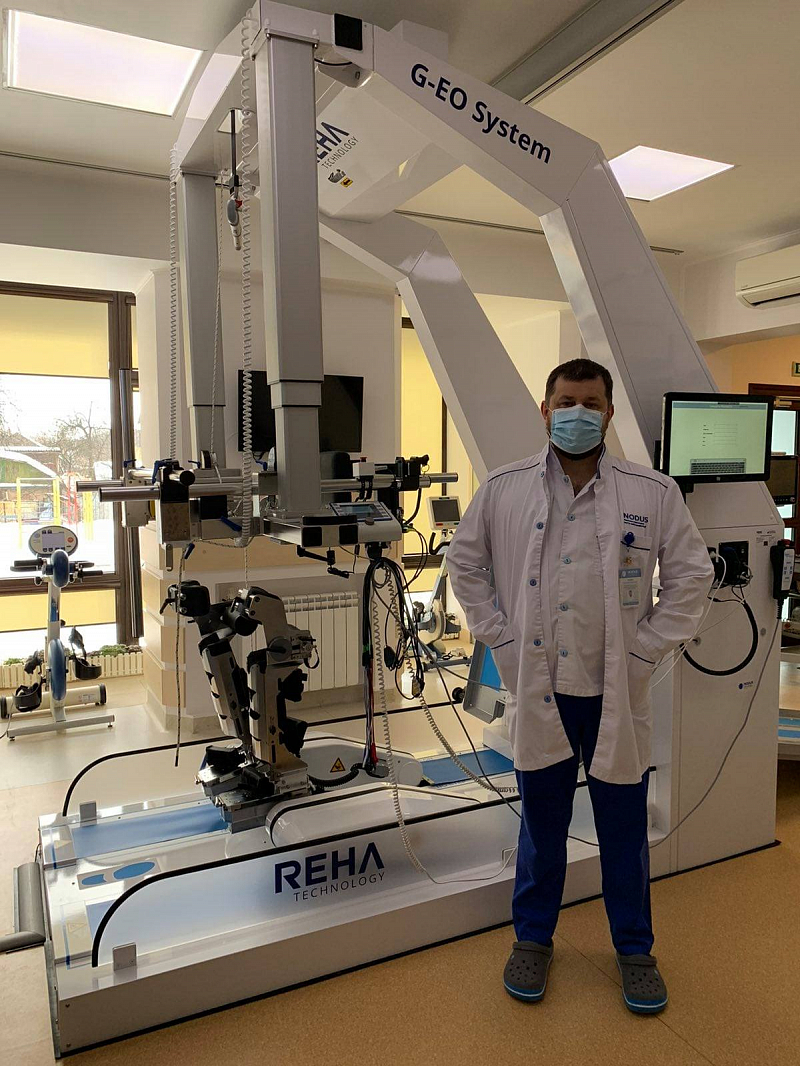 In a moment a blue festive ribbon in Nodus corporate colors will be cut!

In an instant the first patient in a wheelchair will step on the ladder of an innovative robotic device for gait recovery, equipped with modules for neurostimulation, neuromiostimulation and biofeedback to control patients’ walk, physiological capabilities and needs. The appliance of this robotic device will enable the patient to undergo rehabilitation in a shortened time and to be able to walk using orthosis or even without them.

In a moment the enhanced  comprehensive system of advanced neuro rehabilitation technologies at Nodus will continue daily hard working.

In the meantime, while tender hands of Olesya Kyrylchuk, Inna Danchenko, Olga Tkachenko, Olga Timontyeeva – initiators & supporters of  the“ Be powerful at 3000 W(omen)»  charity project, together with the hands of Igor Litovchenko, a talented military rehabilitologist, and the hands of the “Nodus” medics have been holding this blue ribbon, …all recent 7 years flashed in our heads.

Seven long exhausting years, when we launched our «NODUS» charitable project for gravely wounded ATO soldiers,  when first severely injured Heroes of this war crossed the “Nodus” clinic’s threshold in August 2014, with the hope of recovery. When “Kran” Charitable Foundation was established, since we had realized there would be no state support, and we would have to continue running our charity ourselves, uniting the like-minded ones and supporters in order to keep going restoring lives of young warriors, ruined by the war. Years of dreaming about speeding up a rehabilitation process, implementing advanced robotic rehabilitation technologies, tested on practice, in order to provide specialized medical assistance to more wounded defenders of Ukraine. When we jumped with joy, having learnt that LLC EkoPel Medical company, that had been supporting charity project for the ATO combatants before, offered an unprecedented discount on the device. We remembered the first donations and supporters of the “Be powerful at 300 W(omen)” charity project. How it was difficult to inspire hope and convince that the implementation of such a large-scale charity project is possible in Ukraine, despite fading volunteers’ activity and heroic deeds of this war, invincible warriors of Ukraine, defending human values and freedom have become forgotten nowadays.

Today we celebrate this victory, being suffered in many ways.

First of all, we celebrate the Triumph of Unity of socially responsible citizens and companies of Ukraine, as a real Ukrainian  cultural and spiritual elite, united for the sake of those in need, those, impaired and wounded, those, who sacrificed themselves for the sake of Life.

It is a BREAKTHROUGH!